MERSEACA
scale down to happiness

“You can’t stop the waves, but you can learn to surf.”

That is what Jon Kabat-Zinn encourages us all to do.  It’s been about 3 months since I last wrote.  I took a break to learn to surf.  Not the surfing you might imagine with my new home being at the beach, but learning to navigate ups and downs and manage expectations.  Shall I just say I’m learning to “go with the flow” and not fight the whitewater.

This past February was an exciting time.  My builder and I attended the Tumbleweed Tiny House building conference in Orlando.  We met fascinating people and were educated on the differences in building tiny.  We got back home and finalized the tiny house plans.  We were ready and excited to build!  The plans were sent to the county building department for approval. When we received a call from them within just a few short weeks we were excited about the quickness of being able to start building.  That was until we had the actual conversation with them.  The plans were being denied.  One room was too small and a loft with a ladder does not meet fire code.  Frustration set in.  We had worked so hard to get the perfect plan.  A plan that would remain small, have low impact on the environment, but still have room for my photography and a guests to visit and stay.  What now?  Re-design?  Re-engineer?  More costs on an already tight budget?

I have to admit, I am a worrier.  I know some of my dear friends are laughing right now.  There I was on that beautiful beach and the Gulf was tranquil and turquoise.  I was so ready to take that surf board out and paddle around for a while.  The waves looked beautiful.  Then, once I got out there I was out of my comfort zone (my expectations) and the waves started to feel a little less tame.  My heart started to pump and stress set in. So, here I am out in this whitewater I created for myself watching the waves come at me.  Let’s just sit here for a little bit while I tell you about next few waves that approached.

I started calling insurance companies for homeowners insurance.  I’m a planner by nature so I made sure I followed the insurance rule book when originally designing my house.  Hurricane proof- check!  Flood proof on pilings- check!  Hip roof for wind- check!  Apparently, I’m not worth their while.  Well, not me personally, but a 510sf house that isn’t going to cost anywhere near $150,000 to build (the lowest amount of coverage available).  They also do not like houses built on pilings…even if the reason you do it is so your house won’t flood (i.e. insurance claim).  Oh, then there is the square footage issue and my proximity to the Gulf of Mexico.  Well, well, no insurance company wants to take my money.  Hmmmmm.

Here I am wave after wave.  They seemed so beautiful from a distance on the beach.  Now that I’m out here; I’m tossing and turning and the board is bobbing side to side.  Another one is approaching.

The next wave is the banking system.  For pretty much the same reasons the insurance companies had, the banks have no desire to loan me money to build my little dream home; not even with my extremely good credit.  Business is business and this just wasn’t a good business deal.  Not enough money to make it worthwhile and 500sf comps are nearly impossible to find.  My expenses were running about $10,000 over budget and I began to worry that building a tiny home would not be realistic for me.

I’m swallowing water as each wave breaks and scrambling to get back on top of my surf board.  I’m able to get on and am holding on for dear life.  I close my eyes and imagine myself surfing.  Surfing on those beautiful waves I saw from the beach.  While I was once scared of the waves, I now feel unstoppable in them.  I understand the rhythms of the Gulf.  I am able to balance.  I move with the wave instead of fighting it.  I stand tall on my board and know that all of this is just a part of doing what is right for me and the environment.

Like Jon Kabat-Zinn says, “You can’t stop the waves, but you can learn to surf.”  Surf’s Up, Dudes! 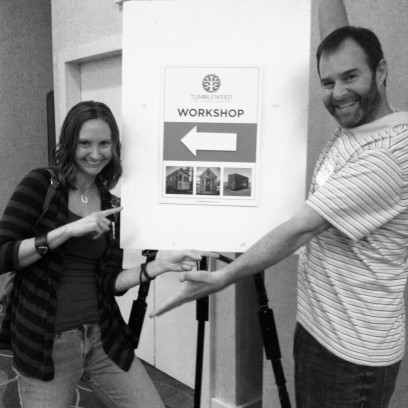